How to pose and photograph groups

Groups are a necessity and it's important to record them for future generations. However you want to get them done quickly, so the bride and groom can enjoy their day. So how do you pose and photograph the groups?

First access the locations available to do the group photographs. This can either be done early in the morning before the wedding or when you arrive at the venue. Sometimes couples will request a venue visit. As photography is all about the light, this is only worthwhile if the light on the venue visit is the same as the wedding day. The problem with seeing the venue in advance, is that the position of the sun varies depending on the time of the year. The astronomy of calculating exactly where the sun will be on the wedding day can be a little involved. So for this reason, I prefer to determine locations for groups on the actual day.

When working out the best location for the groups I look for areas that are not too far for the guests to walk to. No-one wants to walk long distances for group photographs and ultimately the groups will take longer to organise. I'll take into consideration the weather, with rain unfortunately limiting options to indoors or areas under cover. With the inclement British weather, most venues have rooms for this. Even if not raining on the day but has been before the wedding, I'll check the ground. It may not be dry enough to stand on and the bride will not thank you if her expensive heels sink into the grass.

So ideally we are looking for a paved/gravel area close to the reception. However we haven't talked about the most important factor, the light. The groups need to be photographed with the sun behind them. Facing people into the sun produces harsh shadows, especially under the eyes causing unflattering 'racoon' eyes. Even the most powerful flash guns won't be able compensate. So it's vital that you are not shooting with the sun on your subject. Of course if it's overcast, you can shoot in any direction, as the clouds act like a giant softbox. So while the bride might be hoping for bright sunshine, cloud is a photographers blessing.

With the location sorted, the bride and groom are placed in position first at the centre of the group. Ensure the bride has her bouquet and the train is fanned out to the front. To speed events along, your assistant can then tidy up the scene. Often this means moving any objects on the floor that will end up the frame such as drinks glasses or handbags.

Next we add in the people. For family groups the parents are placed next to the couple in boy-girl fashion. So the father of the bride stands next to his daughter. Then the rest of the family is added in. The guests are asked to stand sideways. This is not only flattering as it's very slimming but it allows more people to gather in the space, vital for larger groups. There should be no gaps between the guests, I'll ask them to stand closer if there are any, they should all know each other.

It's useful to have an assistant or second photographer to ask people to step aside if they will be in the background. Having an assistant can be a big time saver. One person can also be setting up the exposure while the other is arranging the group. For group photographs I stop the lens down to ensure sufficient depth of field.

I prefer to set the camera to manual, so that each image has the same exposure. This is useful if you need to open eyes from one group photograph from another. When setting up the exposure I'm careful to ensure that the shutter speed is fast enough to avoid camera shake. Ideally I work at 1/100 second or faster.

Even in cloudy light I use a little fill flash to soften nature's lines in the skin and put a little sparkle in the eyes. With eye glasses wearers be sure to angle the speedlight to avoid those flash-light reflections in the lens.

When composing the image, be sure to leave enough space at either side of the group and not crop too close. This is to minimise barrel distortion of the lens. The people standing at the end of the group do not want to look bigger than they actually are! All this might sound obvious but I've corrected group photographs in Photoshop taken by a professional photographer that were very distorted. It wasn't possible to correct them completely, so I can't stress enough to get it right in camera. That's what we had to do in film days.

Ask everyone to smile or crack your best joke and take a series of shots. Have multiple photos of the group gives options if someone has their eyes closed. If someone looks away, I ask them to look towards the big lens. I'm aim to get it right in camera but if I've a group where everyone has a great expression but one person has their eyes closed, I'll swap the eyes from one of the duplicates I took.

In terms of ordering the groups, I start with the large family group and then remove people for the immediate family portraits, working my way down to groups with the parents. I find this faster than adding people. I print out spare group lists and ask the ushers to gather people so they are ready for the next photo.

For the group of everyone, I find it's best to photograph this from above. Ideally from a first floor window, providing the sun is behind. Then get your trusty assistant to arrange everyone to stand behind the bride and groom. It should be a pleasing shape with no gaps. I photograph this on a smaller aperture to ensure that everyone from the front to the back of the group is sharp. Not all photographers do this photographer. However the best thing about this shot is that the couple have a record of everyone at the wedding and if photographed from a window it's impossible for people to hide.

This is just a small insight into how we photographs groups. With a little planning and a lot of experience, it's possible to have everyone you want in a group photograph and for it not to take over the couple's wedding. 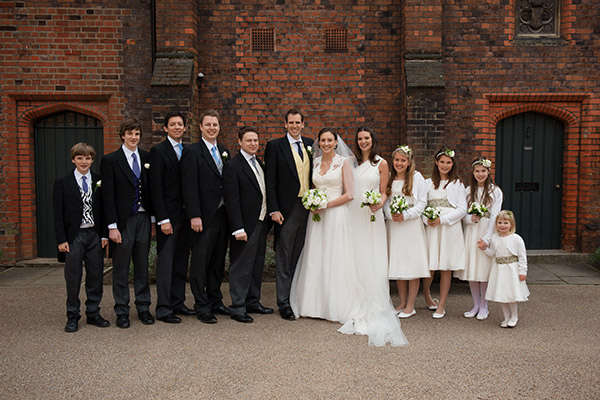 Group photograph with the bridesmaids and ushers 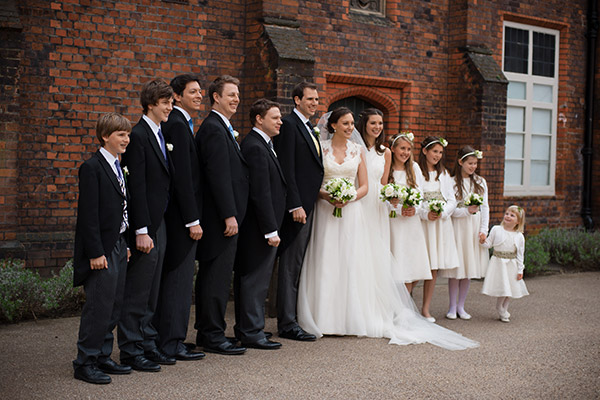 The same photograph taken from the side, I like how the flower girl is peering round, she becomes the focal point of the image 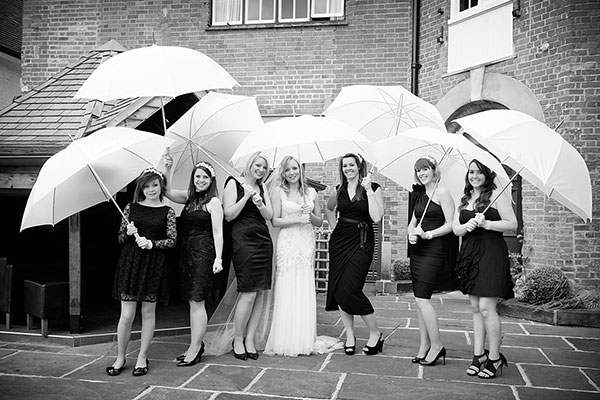 Informal photograph of the bride and bridesmaids